Monster Hunter: World is an action role-playing game developed and published by Capcom. A part of the Monster Hunter series, it was released worldwide for PlayStation 4 and Xbox One in January 2018, with a Microsoft Windows version in August 2018. In the game, the player takes the role of a Hunter, tasked to hunt down and either kill or trap monsters that roam in one of several environmental spaces. If successful, the player is rewarded through loot consisting of parts from the monster and other elements that are used to craft weapons and armor, amongst other equipment.

Connection to Devil May Cry

The quest included a new weapon, 'Dante's Devil Sword' (a charge blade), and the 'Dante α' armor set.which were only unlockoble if you completed the Red Orbs! Quest conditions, which weas earning Hunter Rank (HR) 14 or higher. 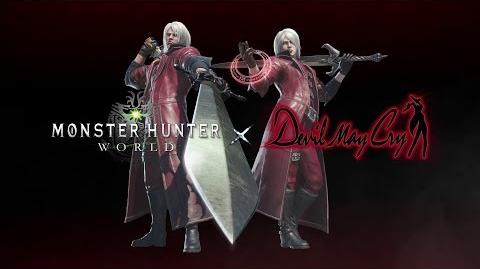