Nevan, also called Lightning Witch[3], is one of the demon gatekeepers of Temen-ni-gru sealed away by Sparda. She is a boss in Devil May Cry 3: Dante's Awakening, and is fought during Mission 09, and then again in Mission 18.

In the Devil May Cry HD Collection, the player will achieve the award "Lightning In A Bottle" after defeating her.

Nevan is a Leanan sídhe who seduces humans down the dark path to Hell. She fights with a combination of lightning and bats, which defend and attack for her.[4] She has some level of humor, and flirts with Dante, comparing him favorably to Sparda.

In the Devil May Cry 3: Special Edition Concept Art gallery, Nevan had brown hair instead of red hair.

When Sparda sealed away the Temen-ni-gru, he placed Nevan as one of the gatekeepers whose life kept it sealed.

Dante meets Nevan on his path down to the Lair of Judgement. When he enters the Sunken Opera House, she greets Dante and flirts with him, but after a bit of banter they begin the fight. Dante defeats her, and she relinquishes her soul to Dante as a Devil Arm, the "Nevan".

Nevan made her first appearance in TEPPEN in the "Adventures of a Tiny Hero" expansion of the game.

Nevan is named for Nemain (ネヴァン, Nevan?), an Irish goddess who personifies the frenzied havoc of war. Her nature and abode are based on the Leanan sídhe or Dearg-Dul, a type of vampiric fairy also from Irish mythology who was said to seduce men with her beauty, and offer them artistic inspiration in exchange for their love, sanity, and lifeforce.

Early in development character of Nevan was called Morrigan,[5] and in some of the sketches she bears a great resemblance to the eponymous Darkstalkers succubus protagonist. The Morrígan is an Irish goddess, associated with war and fate. She is often described as a trio of sisters — one of which is sometimes named Nemain.

Nevan in Devil May Cry: Peak of Combat 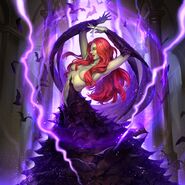 Felyne, Nero and Nevan in TEPPEN 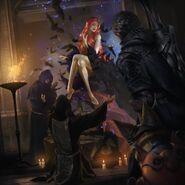 Retrieved from "https://devilmaycry.fandom.com/wiki/Nevan?oldid=116347"
Community content is available under CC-BY-SA unless otherwise noted.