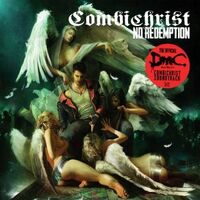 The first disc contains tracks created specifically for the game while the second disc contains 10 Combichrist classics that were licensed to be used in-game.

It was released on January 25th, 2013 in Europe, coinciding with the game's PC version's release, with the CD release for USA and Japan on February 5 and 20 respectively.

Retrieved from "https://devilmaycry.fandom.com/wiki/No_Redemption/Combichrist?oldid=92943"
Community content is available under CC-BY-SA unless otherwise noted.