DmC: Devil May Cry
Osiris is Dante's first angelic form for the Rebellion in DmC: Devil May Cry. It is a light, speedy scythe that is both powerful and reliable. It specializes in aerial attacks and its abilities are centered around giving Dante weightlessness and agility in order to move through the air and traverse the environment with ease.

Osiris is a large scythe with a light blue hue to it, which represents its angelic nature. The blade is long and curved, coming off the tip of the snaith at its heel. The snaith itself looks to be made out of wood, and it has two grips protruding from opposite ends that resemble whittled branches. Dante uses these handles to help him spin the weapon while he attacks. The pommel on the bottom of the snaith is the same as the grip of his Rebellion, owing to the weapon's shape-shifting ability. When it is used to attack, it leaves behind a light blue streak in its wake, similar to the color of the weapon.

The Osiris has a Golden, Bone, and Samurai skins available through DLC that can be acquired for pre-ordering the game.[1]

While exploring the ruins of his childhood home, Dante comes across an old portrait of his mother, Eva. While observing the portrait, Dante is ambushed by a pack of demons. After defeating them, the winged carving at the base of the portrait begins to glow blue and seems to silently call to Dante. Dante moves closer and reaches into the round carving, but his hand is quickly magnetized to the metal. Light bluish, angelic power begins flowing from the carving, through Dante's arm and into Rebellion, which transforms into Osiris. DmC: Devil May Cry

Osiris is a melee weapon great for crowd control and dealing with numerous enemies at once, thanks to its large sweeping cuts. It is faster than the Rebellion, but also a bit weaker. It has a plethora of attacks on the ground and the air, but it excels in the air, bunching up handfuls of enemies and taking them all out with its wide-reaching combos.

As Dante uses it to attack in quick sequences, Osiris will slowly charge up, denoted by light gleaming near the base of the blade. This gives the weapon more power, rivaling Rebellion's, while still offering all of the scythe's advantages.

It's also possible to charge up Raze, and perform a Just Charge by releasing the key just as the attack reaches its maximum charge. This increases the damage, and leaves behind small blue clouds of energy as Dante spins the scythe.

Osiris' Prop Shredder attack can also be used to perform parries by facing an attacking enemy. The attack's longer animation frames act as a larger window with which the attack can parry enemies.

Acquiring the Osiris rewards the player with the Thing drives me crazy award.

As an Angel-class weapon, use of Osiris is done through holding

in tandem with the other face buttons. 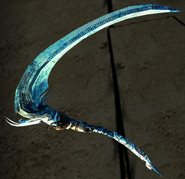 Double Up, from the 2011 E3 trailer.
Add a photo to this gallery

"Osiris" is the name of the Egyptian god of the afterlife. He is often associated with both death and rebirth. His most famous event was when his jealous brother Set murdered Osiris over the throne and cut his body to pieces to ensure he would never return. Fortunately, he was reconstructed by his wife Isis and became the new god of the underworld.

Retrieved from "https://devilmaycry.fandom.com/wiki/Osiris?oldid=111526"
Community content is available under CC-BY-SA unless otherwise noted.