Overture is one of the Devil Breakers in Devil May Cry 5. It was forged from a Blitz. After Nero's battle with it, Nico asked him to take its corpse so she could research how it produces electricity and then use that as a reference to build the Overture.[1]

Overture is a mechanical hand with the primary colors being silver, blue and gold. The only part of the weapon that changes between stowed and firing form is the hand, the wrist splitting apart and the fingers extending so that it can deliver its powerful electrical blasts.

Devil May Cry 5 promo site, Character - Nero[2]
Overture
The first Devil Breaker built by Nico. A comparably orthodox weapon compared to other arms, damaging enemies with electric bursts. Its name is derived from this straightforward functionality. The first Devil Breaker available in the game, this arm is easy for starting players to use.

The first arm I made for your sorry ass after you lost your old one.

It's got a plain-Jane design you can wear just about anywhere without drawing too many glances. Still, if they knew about the electric generator I jammed inside that puppy, they'd be shocked—maybe literally! Still, should be more than enough to take out any scrub demons you come across.

Like the name implies, the Overture is just the prelude to the other beauties I've got knocking around the ol' brain box. Best believe this ain't all I got in store!

Overture is the starting Devil Breaker which Nero is equipped with in Mission 01: Nero. Without DLC, it is the only Devil Breaker that will spawn in this mission, and thereafter will have a random chance of appearing in any non-DLC Devil Breaker spawn location. New Overtures can be purchased in the store for 500

Overture's basic move is a powerful "palm blast" shaped like a giant open hand, directed straight in front of Nero. This attack is fairly wide in effect and can hit multiple enemies. Nero's animation will automatically change to target enemies if they are above or below him when the move is triggered, and the move deals increased damage if it is used against an enemy with a wall behind them. By default, it punches forward. It is a fairly simple, no-nonsense way of dealing extra damage and knocking enemies back. It is more offense-focused than the other starting Devil Breaker, Gerbera, though it lacks the latter's movement options.

The Break Age move functions somewhat like Dante's Real Impact: Nero will load up a powerful swing, then punch forward a short distance. If the move contacts an enemy, the arm will detach and stick into them, becoming a time bomb that will deal heavy damage with an AoE effect against enemies when it detonates. Nero can detonate the Devil Breaker early by shooting the enemy or hitting it with his sword. The only limit to the number of bombs that can be set simultaneously is how many Overtures Nero has: there is no artificial cap.

Unlike the similar move of Punch Line, if Nero fails to hit an enemy with this attack, the Devil Breaker will not be destroyed: the move will simply fail.

The Overture is one of Nero's weapons, it deals Magic damage to all enemies, then enters into a state of Concentrate, increasing the next Mag attack damage by 125%. Nero's animation when using the Overture is taken straight from Devil May Cry 5, as well as the grunts he shouts when using it.

Nero's Voltage skill also uses the Overture animation, this passive skill increases his own party's ATK and EV/AC by 20%, but it's only done after Nero enters a state of Concentrate. 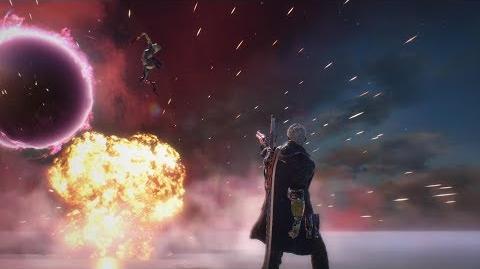 Overture's concept art for DMC5
Add a photo to this gallery

Retrieved from "https://devilmaycry.fandom.com/wiki/Overture?oldid=86490"
Community content is available under CC-BY-SA unless otherwise noted.