Devil May Cry Wiki
Register
Don't have an account?
Sign In
Advertisement
in: Devil Arms, Guns, Weapons,
and 2 more

Devil May Cry 4 (SE)
Pandora is a Devil Arm which Dante obtains in Devil May Cry 4. It is able to transform into 666 different and devastating forms,[1] some of which are powered by the weapon's Disaster Gauge that was built into it as one of its functions, although the player only has access to seven of its forms.

Pandora resembles a grey briefcase with many cracks detailed onto it, for example, the first set of cracks are basically a yellow circuitry, and the second is a vein-looking pattern of cracks. In the center of these cracks silver circle encompassing a three-eyed skull with fangs.

Epidemic is an over-and-under, double barrel bow-rocket launcher with frill-like panels coming out from the sides. The skull emblem is inbeween the two barrels with a golden gear around it.

Hatred is a triple barrel, over-the-shoulder rocket launcher. The barrels are placed in a triangle formation. The rocket launcher itself has three sections. The front has the front of the barrels and three sections that jut out perpendicularly to form a "Y" shape. The middle section has a handle similar to its briefcase handle near the back of the section and a handle that stick out to the side near the front. The back section looks like a handgun hammer.

Revenge is a large, steampunk-designed laser cannon the size of Dante. It has a round, silver core with armor black plating on the top and bottom. It has curved fin on top and a large gold gear on the bottom. There are black cylinders on either side. It has motorcycle-esque handles on the shooters side. Revenge is perpetually pulling in energy and emits a narrow ray of light that acts as a laser target.

Jealousy is a six-barreled gatling gun. It looks like the briefcase split open into four sections, allowing the barrels to exit. The skull emblem juts out, revealing a bandolier.

Argument is a vehicle-like form that hovers with thrusters on the back and rocket barrels all around the seated pilot.

Grief is a tri-blade shuriken with spade tips. The blades are connected by a large, gold gear that is sandwiched between the black rectangular armor plates. There are handles on the end of the black plates on the underside of Grief. Connecting all these portions is a large, silver cylinder with the skull emblem on it.

The Pandora is acquired from the Hell Gate after defeating Dagon in Mission 15: Fortuna Castle. Although it is a Devil Arm, it is treated as a Fire Arm due to its abilities. Pandora is potentially one of the most powerful weapons Dante collects throughout the Devil May Cry series. In terms of raw damage, it is only surpassed by the Gilgamesh, but its quality as a ranged weapon gives it a tactical advantage over the gauntlets. To make up for this power, its forms take a few seconds to activate.

The Disaster Gauge is basically a gauge that determines the quantity of ammo, power and damage given to Pandora's moves. The gauge itself can either be increased or decreased, via customizing the Gunslinger in the Divinity Statue menu. Unfortunately, the gauge has no special features or ability to change the weapons themselves, like the Devil Trigger.

Epidemic serves as this game's standard rocket launcher, functioning similar to Kalina Ann or the Grenade Gun. A single button press transforms Pandora from a briefcase into a rocket launcher that fires two rockets. It has a long recoil and Dante is unable to move until the recoil animation is completed, but it is the fastest and easiest form to use. The rockets themselves only travel mid-distance before exploding. By holding the firearm button, the rockets will not fire and letting go of Lock-on at the same time will allow the player to aim up and down.

Jealously is Pandora's only airborne exclusive form as well as the only form to fire bullets. It shoots at a downward angle and cannot hit targets directly below Dante. While in Devil Trigger, Jealousy fires charged shots.

Hatred is activated by wiggling the analogue stick left and right three times (two in Devil Trigger) while Epidemic is active, making it better suited to fire against enemies that are a bit further away. It fires 3 rockets that have higher damage and travel further than Epidemic's rockets. It has a long recoil similar to Epidemic's, but Pandora returns to its briefcase form, meaning that the player has to go through the process of reactivating it again. Hatred will not fire until the firearm button is let go and letting go of Lock-on while holding the firearm button will allow the player to aim it up and down.

Revenge is Pandora's strongest form in its basic moveset. It is capable of stunning the Savior with one hit and can knock it down in a few hits. As a trade-off for this power, it takes a long time to activate, it requires the player to cycle through Epidemic and Hatred. Revenge can be transformed from Hatred by rotating the analogue stick twice (once in Devil Trigger) while Hatred is active. Dante fires one blast that travels indefinitely and explodes on contact. As with the previous forms, Revenge will not fire until the firearm button is released, and can aim up and down if the Lock-on is disengaged while holding the firearm button.

Argument is Pandora's most utilitarian form. On activation, Dante will hover at the height he was when it activated and can move in any direction, but Dante can't move vertically. Argument can launch one rocket at a time which uses up a little bit of the Disaster Gauge per shot or launch rockets from all the barrels at once at the expense of about half of the Disaster Gauge.

Griefs has the most control and precision of all Pandora's forms and will remain active until the Disaster Gauge runs out or the player releases the Style button. Dante himself is left immobile in his throwing pose while Grief is active, but it can travel anywhere on the screen and will move to any enemy that the Lock-on is switched to.

Omen uses all of the available Disaster Gauge in one attack and affects all enemies on-screen. It is capable of destroying Mephisto, Faust, and Blitz cloaks even without Disaster. With a full Disaster Gauge, Pandora can kill most lesser demons.

It takes the longest of all of Pandora's forms to use due to the long animation. Dante slams the briefcase on the ground waits for it to open up. While most enemies are stunned by the hit, Dante takes a long time to recover from the attack, leaving Dante open to an attack from enemies who recover and attack faster, or if an offscreen enemy makes its way back on-screen after Omen is used.

Trish's use of Pandora is much more limited than Dante's but she can activate its forms much faster than him and can use its rocket forms in midair. She doesn't have a Disaster Gauge like Dante, nor can she use any of its Gunslinger forms.

Trish uses Epidemic as a standard rocket launcher and it is activated with a directional and hold input. This can be used on the ground or in the air.

Trish's Hatred is activated by a directional and hold input. It fires three rockets that travel in a slight arc and launches enemies into the air. Hatred can be used midair as well. The transformation times between Hatred and Epidemic while in the air can be abused to repeatedly shoot them back-to-back, and using this tactic will stop Trish's descent completely. This tactic also quickly raises the Style Meter and Devil Trigger Gauge.

Trish can use Revenge at the cost of three Devil Trigger runes, and is activated with a back-to-forward and hold input. Trish will fire a continuous beam and can make minor adjustments to the aim while firing. It is strong enough to destroy a Blitz's lightning cloak in one hit and continue to fire. Trish is left immobile while Revenge is in use but the blast can stop an enemy attacking from the front and this form can be used in the air as well. 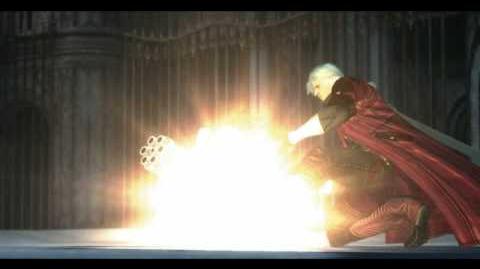 Illustrations from the Devil May Cry 4 Devil's Material Collection artbook.

In Monster Hunter Frontier G, Pandora's Jealousy form is available to players as a weapon in the "heavy bowgun" class.

Pandora's Box was an artifact in Greek mythology which held all the evils of the world. While traditionally called a box, in the original Greek tale it was a jar. Its opening was part of a rather convoluted revenge plan by Zeus against the Titan Prometheus for stealing fire from him to give to mankind: Zeus presented Prometheus' brother Epimetheus with the first mortal woman, Pandora, knowing her curiosity would cause her to open the box. When she did so, it released all the world's evil, with only one thing, hope, remaining inside. PF666 Omen is the most direct reference to this. More casually, a "Pandora's box" refers to something that has many possible negative consequences.

"666" is one possible form of the number of the beast mentioned in the Bible (some texts use 616) and is generally thought to be a reference to the Greek name of the Emperor Nero (Nron Qsr, Nero Caesar) in the Hebrew gematria number code. "13" is widely considered to be an unlucky number, particularly in the Far East where many buildings skip from twelve to fourteen when numbering their floors.

The other names could be Japanese number puns.