watch 02:48
The Loop (Games)
Do you like this video?
Play Sound
This article is about the character in Devil May Cry. You may be looking for the one in Devil May Cry 5 – Visions of V –.

Howard Jerome[1]
“
Recess time is over boy!﻿ Here there's plenty of room to get real nasty. This time there's no holding back.
”
—Phantom to Dante, Devil May Cry

Phantom is a colossal arachnid, as gargantuan as an elephant and covered in a shell harder than rock.[2] The exoskeleton is grey in color and covered in intricate red patterns: through the gaps, Phantom's molten body is visible. His blood is liquid magma, and the creature often leaves a trail of fire behind him as he walks.[3] The head has six distinct eyes, which are normally deep blue but turn red when the creature's tail is unfurled.

Phantom combines traits of multiple arachnids, with an overall form resembling a spider, but a long scorpion like tail with a stinger coiled up on top of his abdomen and massive club-like forelimbs which he uses to strike at his foes. His magical powers are fire-based and mostly related to controlling fireballs or magma. As Dante sometimes encounters harmless infant "phantom babies", it would mean that Phantom isn't actually his name but the name of his race.

Phantom is described as a "general" among Mundus' forces, though the precise nature of this rank is unclear, as he only ever acts alone. In terms of personality he is the quintessential bully, eager to intimidate his foes and quickly frustrated if he is not taken seriously.

Devil May Cry enemy file
This is one of the servants of the Dark Emperor. Inside its exoskeleton body is hot molten lava. Not only is the shell hard, it also protects it from magical attacks as well. (Encounter Phantom)

It releases its magical powers with its mouth. This opening is the monster's weak spot. (Unlocks the first time Phantom opens his mouth)

Coiled on its back is a deadly tail that will thrust its stinger with amazing speed. Keep your distance to avoid being stabbed. (Have Phantom perform this attack)

It can summon the dead by plunging its head into the ground. The dead will awaken in the shape of fire pillars which strike from the places where the ground lights up. Run and jump to avoid this attack. (Have Phantom perform this attack)

It can charge its powers and unleash fires of evil from its mouth. Rolling seems to work well in avoiding this attack. (Have Phantom perform this attack)

When its anger is at its peak, it'll shoot fireballs from its back like a volcanic eruption. Concentrate and dodge this attack. (Have Phantom perform this attack. Mission 08 only)

The body's topside is also vulnerable. If you want to prove yourself as a true Devil Hunter, close in on the enemy and attack him from above. (Jump onto Phantom's back and shoot or melee his abdomen)

Giant demon that has a spider-shaped body and the body fluid made of lava.

Large demon with huge spider-like body and bodily fluids of lava.
The shell is harder than rock, footsteps and breath ignite because of the heat.
Why he is called Phantom ("illusion") is a mystery.

In his introduction, Phantom corners Dante against the altar of the defiled cathedral after Dante acquires the Pride of Lion. Thinking him to be an ordinary human, Phantom expresses disappointment that he is "another small one," complaining that he sensed "something a little bigger."

Dante, recognizing the creature's nature, responds by taunting Phantom, and as the demon lashes out at him in fury, Dante takes the opportunity to jump clear of the altar, engaging the behemoth with the newfound power of Alastor. This proves too much for Phantom, and he eventually retreats.

However, Phantom proves persistent, several times chasing the Devil Hunter through corridors or lying in wait for him. He finally confronts Dante on the castle's roof, claiming that this time he won't hold back. Once again, he is frustrated by Dante's refusal to take him seriously, the Devil Hunter simply complaining that he was getting tired of Phantom's "childish games."

After a fierce battle, Phantom crashes through the glass roof-panel of the castle's entry hall, impaling himself on the spear held high by the statue of a knight at the base of the stairway. Looking up at Dante, the dying Phantom sees Sparda's image, reacting in disbelief that the Legendary Dark Knight could still be alive. Dante corrects Phantom, saying he is not Sparda, but his son. Phantom says no more, crumbling to ash.

When Dante later faces the demon-machine Nightmare in the defiled cathedral, Nightmare proves able to draw the Devil Hunter into its liquid form: were Dante to fall prey to this, he would be forced into an evil dimension where he would once again have to do battle with Phantom.

Phantom makes a brief appearance when emerges from a portal in the sky once the island has been brought closer to the Demon World. No explanation for this fight or his apparent return from the dead is given, though the Guidepost indicates that the portal may be a "door to the past" or that he is simply a different Phantom as noted by the Phantom Babies in Devil May Cry. He does not have any lines. When defeated, he shatters into glass-like shards and reappears as part of Argosax the Chaos.

Phantom is a large and imposing enemy and a distinct step up from anything the player has encountered prior. He is mostly covered in indestructible armor plating, with the only weaknesses his abdomen and open mouth. Hits elsewhere still count as hits for purposes of maintaining Style and building DT, but allow Phantom to counter-attack. He has a variety of close and long-range attacks, and is capable of dealing damage in almost any scenario.

Phantom is surprisingly mobile, with both a backward or diagonally backward ground dodge and the ability to leap high into the air to reposition himself. The latter attack also results in a damaging impact when he hits the ground, so it is important to avoid where he is going to land.

At close range, he has several options: he can lumber towards Dante swinging his front claws, perform a single swat with one claw while standing still, or attack with his stinger which can impale Dante through the chest for a damaging grapple attack: he primarily uses the latter as an anti-air attack. In most battles has two long-range options: he can charge up a fireball, indicated by a bright glow around his open mouth, or plunge his head into the ground and call up fire columns in pairs, tracking Dante's movement until just before the column erupts. The columns are extremely tall, to the point they can even hit Dante while he is performing Air Raid. Phantom is quite happy to initiate his long-range moves at close range, in particular using the fire column attack as an anti-pressure move if he is backed into a corner.

Phantom also has a special instant-kill move if he attacks Dante at close range while Dante is at critically low health: in this move he will slam Dante against the ground and then devour him whole.

The easiest way to defeat Phantom is with Alastor's Air Raid ability. The move auto-targets Phantom's abdomen ensuring constant damage, though Phantom has an invulnerable flinch animation which the player must account for in the timing of their lightning strikes to avoid wasting damage.

He does have other weaknesses: most of his attacks cannot target Dante if the Devil Hunter manages to get on his back, and directing a lot of damage at his mouth in a short space of time will also trigger his flinch animation, cancelling his current attack. It is also possible, with proper timing, to deflect his fireballs back at him.

Phantom chases Dante down corridors in two instances, once during the mission directly after his first fight, and once in the waterways. In this state he has less health and can only use his claw and fireball attacks. The easiest way to deal with this is to run for the nearest door: exiting and re-entering the room will de-spawn Phantom. if Air Raid is in the player's possession, Phantom can easily be slain in order to get a large amount of red orbs.

Phantom can also be fought in the fountain room during Mission 05: Guiding of the Soul or the interlude between the end of Mission 07: Holding the Key of Ardor and the start of Mission 08: The Legendary Knight Returns[4] as an optional boss on Hard and Dante Must Die mode. In the latter case, simply exiting and re-entering the room will cause Phantom to respawn, allowing for Red Orb farming. Because no mission has actually started yet at this point, time, item use and damage are not counted against the player in their final results for Mission 08. In both cases, he will be able to perform the meteor attack he only normally has in the final battle, but his forelimbs will not be glowing red-hot.

The final battle with Phantom occurs in Mission 08: The Legendary Knight Returns. In this mission Dante faces Phantom on the castle's roof. The fight is largely the same as in the defiled cathedral, though with more room to work with, but Phantom has one new trick: he is able to fire gigantic meteors into the sky from his abdomen, which crash back to Earth after a short time and deal major damage. The trade-off for this is that performing this move exhausts Phantom: his lava sections will turn black and he will be briefly left incapable of any further action. There is also a unique gimmick to this fight: if the player can lure Phantom into jumping on top of the glass panel in the middle of the area five times, the panel will break, instantly ending the battle.

Phantom's tactics are essentially the same as from Devil May Cry. The difference here is you don't have the same weapons with which to fight him. Devil May Cry 2 only allows characters to lock on to his head and it does not seem the hitbox for his abdomen is actually present in this game. Be particularly careful of his "Calling Dead Souls" attack, as it can reach anywhere in the battlefield.

Phantom makes a cameo appearance in the opening animation for the Devil May Cry anime. There are actually two Phantoms in the sequence, but Phantom himself is never encountered during the story. Oddly the opening has him bleeding actual blood and not lava, which could be a reference to his initial development as a Resident Evil 4 creature.[5]

Phantom appears in Devil May Cry 2 novel. In a human form, he is described as "a squat bull of a man whose stance betrayed a fire that blazed stronger than the others". He also assumes his traditional demon form while fighting alongside Dante during the rebellion against Mundus.

In the Dreamwave comics version of Devil May Cry, it is revealed that Phantom tried to eat Dante as "only a demon of the highest order can initiate the evolution," implying that he devours other demons in order to grow stronger.

In the game Bayonetta, directed by Hideki Kamiya, the director of the original Devil May Cry, Bayonetta can summon a demon known as Phantasmaraneae that greatly resembles Phantom. This was intentional, as Kamiya claims that he sees Phantom as an offspring of Phantasmaraneae.[citation needed]

Phantom is featured as an unlockable card in TEPPEN. Part of his tail can also be seen in an Argosax card.

Concept art of Phantom as a BOW from early Resident Evil 4 development. 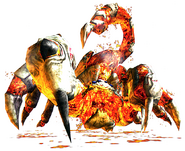 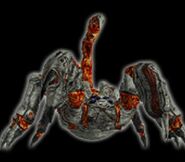 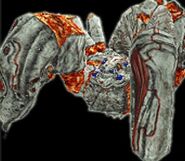 Argosax's card in TEPPEN with part of Phantom featured.
Add a photo to this gallery

Retrieved from "https://devilmaycry.fandom.com/wiki/Phantom?oldid=116000"
Community content is available under CC-BY-SA unless otherwise noted.