Edit
watch 02:34
Fire Emblem Warriors: Three Hopes - The Loop
Do you like this video?
Play Sound

Devil May Cry
Plasmas are shapeshifting lesser demons that Dante encounters in Devil May Cry. They are are formed from electricity, and have the power to copy the shape and abilities of their opponents.

Plasmas are extremely aggressive in both forms and will immediately attack Dante as soon as he enters the room they are in. Bat Plasmas prefer to attack at long range and will sometimes hover at a distance, but will typically try to move close to Dante and transform after a while. Human Plasmas prefer to fight at close range.

They are electrical evil spirits transformed into the shape of bats. (Encounter enemy)

When they are in the form of bats, they fire blades of electricity. Be ready when you see them start to charge up light. (Have a bat-form Plasma use its energy blade attack)

The charged electricity that fires from their eyes is dangerous. The electricity travels horizontally so if you sense danger, jump upwards to avoid being hit. (Have a Plasma use its beam attack)

The Plasma will separate without warning. How they separate is unknown. Even after separation, they have identical abilities and fully recovered energy. The only way to stop them from multiplying is to eliminate all of them almost simultaneously. (Have a Plasma split while in human form)

Plasma is an embodiment of evil electricity. Thus, the use of Nightmare-beta against it is useless. Its ability to manipulate ambient energy will only bend the light, not damaging it at all. (Fire Nightmare-β at a Plasma)

Alastor is the form of "Spirit of Lightening" [sic]. It only obeys commands of the chosen one. Hence, the powers of the Alastor do not work effectively against the Plasma. (Attack a Plasma with Alastor)

On lower difficulties Plasmas are first encountered when Dante returns to the castle's entrance hall in Mission 16: Nightmare of Darkness, while on higher difficulties they replace the Beelzebubs in Mission 06: Evil of the Waterways. Easy Automatic mode tends to use Plasmas to replace Frosts, so they are encountered much more frequently.

Plasmas take no damage at all from Nightmare-β, so it is pointless to use it against them. They are resistant to Alastor, but not to nearly the same extent as Frosts and it is still quite effective against them, particularly if used in combination with Devil Trigger. This is important in fresh-character high-difficulty runs where Plasmas appear before Dante acquires Ifrit.

They have the following abilities in bat form:

Bat form Plasmas are not particularly dangerous and can be taken on with just guns: the Grenadegun is particularly effective at dealing with them. They will often be off-screen at the start of a battle, so listening out for their audio cues is key to avoiding damage.

In their human form, they have the following abilities:

When dealing with a group of human-form Plasmas it is best to wear the group down and then deliver quick finishing blows to each rather than focusing on them one at a time. Dante's single best tool for dealing with human-form Plasmas is Ifrit's Inferno move, which will kill them instantly and can easily take out a whole group in one go. It is wise to avoid landing too close to them, however, as it is quite possible for a Plasma to score a quick hit on Dante before it takes the hit from Inferno. DT Kick 13 is also very effective against them.

In Dante Must Die mode the Plasma is unique in that when Devil Triggered it gains boosts to its defense, damage and speed. However, their reduced basic health in this mode means that a single uncharged Meteor 2 is all that it takes to kill one of them instantly.

Plasma is the fourth fundamental state of matter, beyond gas: in this state a gas consists of free electrons and positively charged ions. Plasmas are strongly influenced by electrical and magnetic fields in a way that normal gases are not.

The Plasma appears to have been built on a scrapped giant bat enemy design which can be seen in early Devil May Cry concept art, with the alternate form a low-detail version of Dante's character model.

Plasma is an alternate costume for Dante. 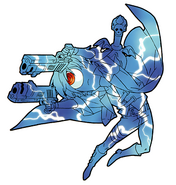 The Plasma's bat form is featured in its own card in the game (No. COR 096), as part of the Core Card Pack. It is a purple unit card.