Nico creates Rawhide from a fragment of the demonic machine Gilgamesh recovered after it is defeated by Nero. It is primarily blue, red and black, with a metal claw-hand and a forearm with a ridged surface.

When in use, this is revealed to be a series of segments stacked on top of each other: they unfurl to form a serpentine whip with a claw tip and bladed edges.

This beauty was crafted out of demonic metals, unfurling into a metal whip of impressive length. Use Rawhide to increase the power of your Snatch technique.

That underworld metal we got off Gilgamesh is known for the shocks it produces. But get this: instead of just using it to shoot more shockwaves, I developed an arm that stretches out into a thin, powerful weapon!

It's stronger than your wire, too, so I bet some of the enemies you can't normally pull in won't pose much of a problem with this one. Course, you could always just wind it around one and slice them to ribbons. Hey, whatever turns your crank.

Rawhide is unlocked at the start of Mission 07: United Front along with Ragtime. Following this, Rawhides will spawn randomly in missions along with other Devil Breakers, and can be purchased in the store for 1000

Rawhide has two main functions: it is an enhancement to the Wire Snatch ability, and a melee weapon that performs area attacks.

Rawhide's enhanced Wire Snatch is an always-on passive enhancement with no special command required to use it: unlike the normal Wire Snatch, Rawhide deals damage when pulling an enemy in, with the amount proportional to how far they are pulled. Rawhide's Wire Snatch can also pick up some enemies which would not be able to be picked up with the normal version if they are weakened. If it cannot, it still deals damage as Nero pulls himself to the enemy, and the animation ends with Nero performing an automatic flip-kick on the enemy. In addition, it also slightly improves Wire Snatch's range. It enhances only Wire Snatch, not the regular Snatch that Nero gets at the end of the game.

The regular move, Side Winder, performs swirling melee attacks that hit all around Nero: due to this, it is excellent for parrying attacks. The basic combo is three hits on the ground ending in a ground slam or two in the air with the second gaining Nero a little height, but in both cases it has a five-hit pause combo which can be performed by delaying the second input. Doing this will lead to three identical, more focused strikes ahead of Nero, followed by a ground slam on the ground or a final attack that pushes Nero backwards in the air.

The Break Age, Loop the Loop, has Nero swing Rawhide around his head. If it strikes an enemy that Nero could pick up with Wire Snatch under any circumstances, even if those are not the current circumstances, they will be impaled by the wire and Nero will spin them around and repeatedly slam them into the ground. If more than one enemy is present, the first one the wire strikes will be picked up, while the others will be hit as Nero spins the enemy around in a similar manner to the Buster move for a Riot. If the enemy is too large, Nero instead performs a powerful canned combo against them.

While the description implies otherwise, Side Winder can also be performed in the air. 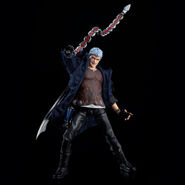 The Rawhide on Nero's Sentinel figure