Rebellion is Dante's trademark sword appearing throughout the series. Though it has the form of a standard sword,[2] it is a magical blade given to him as a keepsake from his father, Sparda, and it serves as a physical manifestation of his power.[3] The blade's power originally laid dormant,[4] but through contact with Dante's blood, it was awakened.[5]

Rebellion is a massive claymore sword with a heavy double-edged blade, notched on both sides near the tip. In its dormant form, the pommel is a single spike, but after awakening it splits open into several. The grip is plain, but the guard is skeletal, with a skull-design on each side leading to the rib cage from which the blade emerges; on one side of the blade, the skull is that of a human, while the other uses a horned demon's skull. Initially, the crossguard is folded in against the ribs, but it extends and the skull transform to a screaming skull once the sword is awakened by Dante's blood.

In Devil May Cry 5, Rebellion recieved a slight redesign. The grip has a an interwoven pattern. The quillions are smaller and have a slight curve to them. The skull and quillions both have swirling patterns on them, and the skull on the "demon" side now has horns coming out of its eye sockets.. The ribcage is now just a raised addition to the blade rather than surrounding it, with the blade going all the way back to the guard. The blade also has swirling patterns reminiscent of pattern-welded "Damascus" steel, with the pattern darker and more noticable on the "demon" side, and has a slight rainbow-coloured sheen to it.

The Rebellion is a remarkably powerful magical sword. It is sharp enough to impale the surface of the Savior's body while it is powered by the sword of Sparda. It is also one of the most durable objects in the series, capable of withstanding hits from the space-cutting blade Yamato, as well as a direct punch from the Savior.

In Devil May Cry 5, Dante figured out that Rebellion also had a power opposite from that of Yamato. While Yamato could separate one individual from their demonic power, Rebellion can seemingly unify one with sources of demonic power, and Dante used this to absorb both Rebellion and Sparda into himself, granting him increased power, a new Devil Trigger form and a new sword named after himself that he could summon at any time he wants.

Rebellion once belonged to Dante's father, Sparda, who split his immense power into it as well as Force Edge and Yamato, and gave it to Dante as a keepsake according to the description from Devil May Cry 2 and Devil May Cry 3. He uses it as his primary weapon while exploring the Temen-ni-gru, but after his first battle with his brother Vergil, Dante is impaled with the blade, with his blood inadvertently awakening the blade along with his demonic powers, and granting him access to Devil Trigger. Devil May Cry 3: Dante's Awakening Dante continues to use the sword until he recovers his father's personal blade, the Force Edge. He goes back to using the Rebellion after giving the Force Edge to Trish. However it's not seen in the first. Devil May Cry When on a mission, Dante just carries the sword on his back, but while among humans, he carries it in a guitar case to avoid unwanted attention. Devil May Cry: The Animated Series

Dante brings Rebellion into work one final time during the events of Devil May Cry 5. The sword's blade is shattered during the first fight with Urizen, leaving Dante with the seemingly useless hilt and grip. Dante temporarily replaces the sword with Sparda only to once again fail in beating Urizen. Dante ultimately contemplates why his father gave him the Rebellion and wonders if it has any similar power with the Yamato, then proceeds to stab himself with the broken sword and triggers the sword's hidden power to assimilate itself and Sparda into the user. This gives Dante the amount of power he needs to finally battle Urizen on even grounds, although Rebellion itself no longer exists and seemingly merges with Sparda to create a powerful sword named after its wielder. Devil May Cry 5

In Devil May Cry 2, Rebellion is the default sword in Dante's arsenal and it functions like the other melee weapons in terms of physical potential, excluding the Sparda, which is no longer used by him. Also, Dante has his Devil Trigger and thus, attack power is amplified but not as much. However only in the demonic form can the player utilize the abilities of the Amulet's and when airborne, Dante can throw his sword like a boomerang at enemies.

In Devil May Cry 3, the Rebellion has been evolved to allow additional abilities, he has access to his full Combo moves which include various slashes. He can apply some of his power to "Drive", which he spends time channeling red energy into the sword to throw out a tremor-like shockwave that will go after all enemies and may trip them. In his new Swordmaster Style, Dante can has more attack styles, he can execute Aerial Rave which is where Dante jumps and attacks with his swords many times until he drops, he can utilize Sword Pierce to throw Rebellion at an enemy or wall, until the player chooses to call back the sword that performs a manner similar to the Round Trip (which has demonstrated hits when demons aren't aware of the sword lodged in the wall behind them) and Dante can use the time to attack with his bare hands & feet or with other enemies until then. Dante can also execute Prop Shredder to swirl his sword like a buzzsaw that can throw up enemies and cut them in the center. Lastly, Dante can perform "Dance Macabre", where he performs all his combo moves and million stab until he then spins rapidly on his sword like a dancing pole before finishing off the attack with a large sweep.

In the Devil Trigger form, Dante performs faster moves and cannot be interrupted unless it's a large foe. He can however, utilize his folded coat wings to naturally glide and when he utilizes Air Hike near a wall to leap off of, he can descend faster and go longer in distance.

In Devil May Cry 4, the Rebellion has been given longer durations of the "combo" moves and from skill, Dante had faster speeds and could thus execute his "Drives" with a "Quick" manner, these moves now utilize pure energy merged with the slash and extended with the "Overdrive". Dante has the ability to increase the length of his attacks and power with his Devil Trigger, which gives additional power to his moves, such as Stinger. His Round Trip returned, but could be used much easier like the sword that replaced Rebellion; Sparda and he could command it just like the previous Sword Pierce. In "Dance Macabre", Dante would do the same attacks to start it off, but now the difference is that instead of swinging on his sword like a dancing pole, Dante kicks up his foes into the air and swing them away with an energy-empowered baseball bat swing.

In Devil May Cry 5, Rebellion is only used in Dante's first mission, though it is identical in moveset to Sparda and any skills purchased for it carry over. After the game has been completed once, the player can select whether to use Rebellion, Sparda or Devil Sword Dante as their sword, but once this selection is made it cannot be changed without visiting a store. On completing Son of Sparda difficulty, Dante will unlock a skill called "Irregular Full Custom" which allows him to equip all three swords at once.

Like Sparda, Rebellion is inferior in most regards to Devil Sword Dante, lacking its special "Swords Formation" moves and ability to use Drive or Overdrive. Dante can still access the Sin Devil Trigger while using Rebellion, however.

Dante wields Rebellion. One of his special moves is also named "Rebellion", which deals a moderate amount of Almighty damage to a single target and cannot be dodged; the animation for this move is a five-hit combo using Rebellion.

Dante wields his Rebellion and can perform many of his signature techniques, including High Time, Helm Breaker, Prop Shredder, Stinger, Million Stab, Aerial Rave, Drive, Air Hike, Dance Macabre and Crazy Dance. Dante can also perform a new Level 3 Hyper Combo, "Devil Must Die", in which he zips back and forth with Stingers and stabs the opponent with a final Stinger that propels the enemy backward into a magical trap of some sort that resembles those set by Trish.

In this game, Rebellion functions the same as it did before, but now its power has access to a feature similar to the Super costume when in battle with Jedah. Because Rebellion was a cameo like its previous appearances, there are no new gameplay features due to it working the same.

Dante wields Rebellion. One of his skills is called "Million Stab" which deals Physical damage four times to all enemies. Dante's animation resembles that of the Million Stab seen in Devil May Cry 5, but only the ending part. 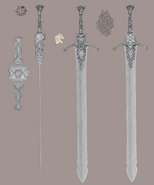 Rebellion's concept art for DMC5
Add a photo to this gallery

Retrieved from "https://devilmaycry.fandom.com/wiki/Rebellion?oldid=88217"
Community content is available under CC-BY-SA unless otherwise noted.