Riots are reptilian lesser demons evolved from harsh environment of the Underworld, gaining retractable razor-sharp claws that can cut through steel with ease, two rows of sharp teeth, and lower jaw that can separate sideways. They have strong muscles on their limbs that have strength equal to a hydraulic cylinder that enable these creatures to jump incredibly high. While sharp, their claws can be broken with enough force.

The pits of Hell spew up all kinds o' reptilian nasties, and this is one of them.
I studied their cell samples and let me tell ya, their muscle tissue is something else. Each limb has power like a hydraulic cylinder. That's how they jump so dang far.
And I ain't exaggeratin' when I say their retractable claws are razor sharp. I tried one on some sheet metal- zzzzip! Cut right through. Weak to impacts though. Think you can break 'em off?

The Balrog is capable of stunning in the Riots with continued Light Blows in Blow Mode, leaving it open to something like a Real Impact or other powerful attack.

On Dante Must Die, the Riot will activate its Devil Trigger much earlier than any other enemy - long before it reaches low health.

The Riot first appeared in TEPPEN with its "The Devils Awaken" expansion. He is featured in one unit card and an action card. 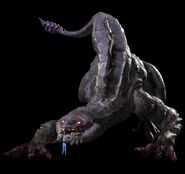 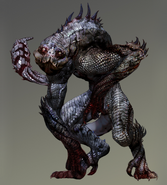 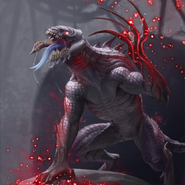 Riots in Devil May Cry 5: Visions of V
Add a photo to this gallery
Retrieved from "https://devilmaycry.fandom.com/wiki/Riot?oldid=115905"
Community content is available under CC-BY-SA unless otherwise noted.