These low class demons which take the form of the Laughing Skull demon are commonly known as Sargasso. They function much the same way; their chilling laugh can freeze solid those unlucky enough to hear it. They drift and hide between the edges of the seas of the Earth and the sea of the Netherworld, waiting for stray wanderers to feast on.[1] The spirits of the victims are destined to wander the endless sea of the Underworld.[2] They are cunning demons, moving swiftly and only showing themselves when they attack.[3] Though they are deadly to most humans, they are merely nuisances to Dante, as he can kill them quite easily with a few hits.

These enemies aren't hard, just fast. They come in two sizes, but the only real difference between the two is the larger ones have more Vitality. Using Stinger or Ifrit's Kick 13 attacks would aid in getting to them quickly and keep attacking them. They may try to bite you, but back flipping or jumping is adequate to avoid it. When you see them charging up energy in their mouths, they are attempting to breathe ice on you. Although the ice breath attack hurts and has a wide cone of attack, it has a fairly short range, so you can run away from it pretty easily. If they do bite you though, they'll chatter their teeth as if they are laughing at you.

Very similar to Devil May Cry, only this time Sargasso have an additional attack where they shoot icicles at you. The icicle attack is stronger and has a greater range than their breath attack, but still avoidable. Several hits will kill them, but they continually respawn, making it not worth your while. Avoid their attacks while working towards the actual goal of the Mission. Like before, if they bite or shoot their icicles at you, they'll chatter their teeth like they're laughing at you. Sargasso become much more dangerous in Devil Trigger, as all of their attacks will start launching arcs of lightning, which can quickly overwhelm the player.

Sargassos don't pose much of a threat alone, nor in big numbers. However, the main advantage they take is being invulnerable to any attack in static mode, which slightly makes them faded. And once the distance between Dante and demon skull is closed, Sargasso immediately rushes into attack to deliver bites. Although might being able to overwhelm the player with genuinely big numbers, the fragile material their skulls are made of makes them a not so scary strength in numbers. 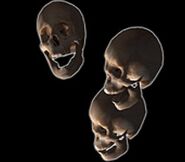 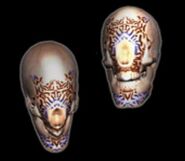 These demons are named after the Sargasso Sea, a portion of the North Atlantic Ocean that is known as the "sea without shores" because it is bordered on all sides by ocean currents. Its westernmost edge borders Bermuda, making it a neighbor of the infamous Bermuda Triangle.

Retrieved from "https://devilmaycry.fandom.com/wiki/Sargasso?oldid=115998"
Community content is available under CC-BY-SA unless otherwise noted.