Harrison Bacon
Scudo Angelos are some of the enemies encountered throughout Devil May Cry 5.

Scudo Angelos appears as a humanoid demons in black armor with blue ornaments on it as well as blue cape on their back. They possess one handed demonic sword as well as shield that they're using to parry attacks.

The Scudo Angelos, just like Bianco Angelos seems to have no real self and follow the orders of the Proto Angelos.

Scudo Angelos posses a variety of attacks with sword and shield, however their attacks are rather slow and easy to predict. Under the control of Proto Angelo, they'll become more aggressive and perform a number of team attacks.

Nico's Enemy Report - Scudo Angelo
In his journals, my daddy sometimes mentions the Black Angel- some kind of powerful demon that used to inhabit the underworld.

Daddy had a theory that it was created by transubstantiating an unwilling human victim into demon flesh.

If that theory was right, then these dead-eyed creeps are like a mass-produced version of the Black Angel.

Their shields? Hella tough. If you wanna get around 'em, you're gonna have to use your head. Good luck with that.

What makes Scudo Angelos troublesome to fight are their shields, which can block any frontal attack as well as Nero's Snatch and Wire Snatch. It is therefore advised to attack from their backside, where the shields do not reach. This is a good method for Nero and Dante, who can just launch it into the air, where it is defenseless. While V needs to rely on the current position of Shadow or Griffon in order to place this enemy in the air. This is especially easy for Dante using King Cerburus' Crystal, which ignores the shield while launching the Scudo.

Otherwise, the shield can be broken once enough damage has been inflicted. A good stratagy for this is using Light Blows and Middle Breaks from the blow mode of Dante's Balrog, which can effectively keep it stunned until death. For Nero, Helter Skelter is the ideal Devil Breaker to use again them, since it was specifically designed to break guards. Another method is by blocking it's sword strike attack, which will instantly break the shield. Dante can easily do this by using King Cerberus' Revolver and Ice Age, which leave no openings. 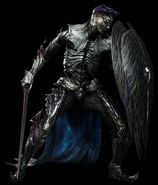 Scudo Angelo face
Add a photo to this gallery

Retrieved from "https://devilmaycry.fandom.com/wiki/Scudo_Angelo?oldid=115782"
Community content is available under CC-BY-SA unless otherwise noted.