Devil May Cry Wiki
Register
Don't have an account?
Sign In
Advertisement
in: Guns, Weapons, Devil May Cry,
and 9 more
English

Devil May Cry
Devil May Cry 2
Devil May Cry 3: Dante's Awakening
Devil May Cry 4 (SE)
Devil May Cry 5
Devil May Cry: Peak of Combat
The Shotgun, as well as Coyote-A in later games, is a hunting firearm that fires buckshot across a wide area[1][2], making it very powerful at close range.[3][4] Like Ebony & Ivory, the Shotgun retains the same functionality throughout all of its appearances, despite being a different entity in each game.

All incarnations of the Shotgun and Coyote-A are double-barrel sawed-off break-open shotguns with wooden furnishings, with a prominent curve to the grip. Throughout the first three games the weapon is not noted to be anything more than a mundane cut-down hunting shotgun with decorative engraving on the metal components: the only unusual feature is a projection in front of the trigger that resembles the fixed magazines of some bolt-action rifles such as the Lee-Enfield and Mosin-Nagant. It is unclear whether this is supposed to be a functional part of the weapon. They are a single-trigger type, firing both barrels at once.

Starting with Devil May Cry 4 Dante switches to using a more distinctive, heavily customized shotgun called Coyote-A. Unlike the shotguns of previous games, Coyote-A is clearly not a normal manual breech-loader: rather, it has two small detachable magazines located just behind the break-open hinge, and a reciprocating bolt handle on top of the rear section resembling that of an older-model Thompson SMG. The Devil May Cry 4 concept art implies that this functions by a linked double bolt being forced back during firing and locking in the rearward position, the gun being broken open to eject the fired cartridges, and on closing, the bolt being released to chamber fresh shells in both barrels.

Library - Arms - Dante's Arms
COYOTE-A
A shotgun firing buckshot, it has been modified for combat use against demonic foes.

Library - Arms - Lady's Arms
SHOTGUN
A hunting gun that shoots pellets out over a wide area.

Devil May Cry 5 promo site[5]
Coyote-A
A shotgun modified by Dante to wield in the fight against demons.
Its outstanding power in close quarters more than makes up for its lack of speed.

Compared to the sheer beauty of my grandma's guns, this thing's barbaric! Have you SEEN what this thing is like inside!? it's like blowing up a dam to put out a campfire.

Dont get me wrong, I could make something just as gnarly...and pretty to look at, to boot. Doubt Dante would gave two shakes about that, though.

In Devil May Cry, the Shotgun can be found under a desk in the Castle library during Mission 2: Judge of Death. Dante needs to break the desk first to pick it up. It is more powerful than Ebony & Ivory and has a powerful knockback effect on weaker enemies, but is slower-firing and has much greater spread which limits its effective range. As with all bullet-firing weapons, it can perform Charged Shots when Alastor or Ifrit (or Yamato) is equipped by holding down the fire button until the Shotgun crackles with energy. Unlike Ebony & Ivory, its shots appear to still be hitscans even when it is charged.

The Shotgun normally has a recovery animation when used on the ground of Dante flicking the weapon to eject the spent shells, but this can be cancelled with a technique called "shotgun twitching:" while holding

a slight tap in any direction on the left analog stick immediately after firing will cause the flicking animation to fail to play, allowing the shotgun to be fired again instantly. It can also be roll-cancelled like the Grenadegun, though this is not as fast as twitching. A jump-cancelling trick called "Shotgun hiking" also exists which can be used to perpetually juggle certain enemies, specifically Marionettes and Fetishes, by launching them with a rising High Time and then alternating jumps and shots from the Shotgun. This requires Air Hike, hence the name.

In Devil May Cry 2, the Shotgun is found in a garage after defeating Jokatgulm, during Mission 4 of Dante's scenario. The Shotgun is able to be used as a finisher for a 1-, 2- or 3-hit combo.

In Devil May Cry 3, the Shotgun is found in the Bullseye Bar during Mission 3: The Devil's Tower of Dante's scenario. It is hanging on the wall in a frame, in the narrow hall leading to the door to Love Planet. Upgrading it increases the number of pellets fired per shot.[6] It is possible to perform a ground-based jump, Air Hike, or Enemy Step right after firing the shotgun to cancel the downtime between shots, which the player can exploit to immediately fire the weapon again, drastically increasing the rate of fire on the normally slow weapon. This makes it possible to devastate enemies with the repeated shots via Jump Cancels.

While using Gunslinger, Dante can charge the shotgun with demonic energy and can increase the gun's rate of fire. Fireworks returns from the previous game, but is now the basic Gunslinger move rather than a combo input: repeatedly pressing the Style button will increase the number of shots fired. While using Fireworks in the air, Dante gains a little bit of height. With Gun Stinger, Dante slides a short distance, ramming the Shotgun into an enemy while firing a high-powered shot, essentially a way to perform an instantaneous Charged Shot. This can Crazy Combo into Point Blank, which fires even more shots.

In Devil May Cry 4, Coyote-A is one of Dante's default weapons. It is largely the same as in the previous game, though due to the removal of most Crazy Combos it does not have Rapid Shot or Point Blank anymore. Charge Shot returns to being a basic ability of the weapon rather than being specific to Gunslinger. Fireworks in the air is now listed as a distinct move, and it has a new move called "Backslide" which allows Dante to fire a quick shot directly behind him. As with the previous shotguns, Coyote-A's shots can hit targets at any distance, but is only truly effective at close range. Coyote-A is extremely useful for destroying the protecting gas cape of the Mephisto & Faust, as well as the shield of Assaults. It is generally useful for crowd control, as its normal shot can cause stun and recoil at close range. Fireworks, especially, comes in handy when surrounded by many enemies. Also, the Gun Stinger attack is one of the few that can stun a Chimera Seed that is attached to a Scarecrow, and is also a one hit kill for a Chimera Seed. If you are up against a Basilisk they automatically knock it over for a fast combo.

It is possible to perform a ground-based jump, Air Hike, or Enemy Step right after shooting the Coyote-A to cancel the downtime between shots, which the player can exploit to immediately fire the weapon again, drastically increasing the rate of fire on the normally slow weapon. This makes it possible to devastate enemies with repeated shots via midair Jump Cancels.

In Devil May Cry 4: Special Edition, the Shotgun is one of Lady's weapons.[7] Its moves are similar to Dante's Coyote-A, with "Double Barrels" being her equivalent to Fireworks, while "Rush Hour" is her equivalent to Gun Stinger, though she does not have Backslide. Her Gun Stinger can be upgraded with "Ground Zero," which performs a second shot that launches Lady back away from the enemy. The main difference, though, is that Lady's version can be upgraded to have a multi-stage charge which uses progressively more powerful ammunition. Unlike Lady's other guns, the charge is not a single shot: instead, it creates a specific amount of "ammo" for the Shotgun, and the Shotgun cannot be charged again until all of the existing charge ammo is depleted.

In Devil May Cry 5 Coyote-A is one of Dante's starting weapons and is largely unchanged from the previous game. The main alteration is a series of additions to Gun Stinger called "Cut-in." These unlock at Gunslinger level 4, and allow Dante to interrupt the forward dash with a directional dodge before firing. Dante can perform multiple Cut-ins off a single Gun Stinger, firing a shot with each. 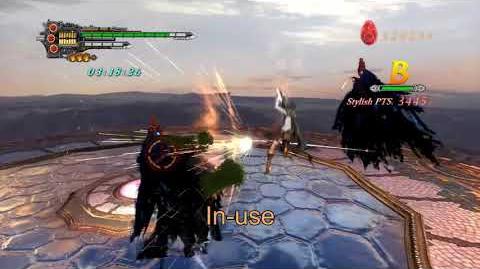 Coyote is a trickster spirit in several Native American mythologies. Coyote's depictions vary greatly between these with the spirit sometimes regarded as immensely powerful and sacred, but he is generally regarded in a similar manner to foxes in European mythology and fable, some myths treating him as being outright evil while others regard him as a prankster who uses his supernatural powers for his own amusement.

Concept art of Coyote-A from the Devil May Cry 4 Devil's Material Collection artbook.

Dante with the Devil May Cry Shotgun. 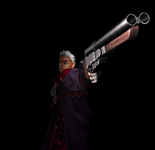 Sparda with the Devil May Cry Shotgun.

Dante with the Shotgun in his right hand in promotional art for Devil May Cry 2.