Edit
watch 02:17
New Pokemon Games - The Loop
Do you like this video?
Play Sound
This article is about the Devil May Cry 1 enemy. You may be looking for the Seven Sins from the manga.

Devil May Cry
Devil May Cry 5
Sins are a family of lesser demons in Devil May Cry that all share similar characteristics. An enemy called Death Scissors appears in Devil May Cry 5, though it is more like a hybrid of both "Scissors" enemies tending more towards Sin Scissors. They fly, can travel through walls, and are immune to all attacks except those aimed at their heads. A stronger version of the Sins are the Deaths.

The Sins as they are called, are low-class demons that can only exist by taking a shape of physical objects, mostly a black robe resembling that of the Grim Reaper. These wicked spirits have chosen deadly weapons such as scissors or scythes as their shape.[1][2] They are also are dependent on the masks they wear: They cannot exist without them.[3][4] Their capes are nothing but illusions, and are impervious to physical attacks.[5][6][7]

Sins come in two varieties, based on the weapon they use: Sin Scissors and Sin Scythes. Both wear masks to maintain not only their form, but their power as well when in the Human World. Their bodies seem to consist only of robes filled with dark, almost ethereal energy.

True to their name, Sin Scissors use a pair of rusted scissors to tear and clip at their foes, while Sin Scythes use scythes to rip and slice their enemies to pieces. Both are capable of flying, as well as phasing in and out of walls. With both of these enemies, it is best to keep moving when they descend near your position. The Sin Scythes are almost identical to the Sin Scissors, except that they emphasize fast, multi-hit attacks. The primary attack to watch out for is the “Boomerang Scythe”[8][9] technique they will occasionally use. The best way to weaken these two forms is to shoot their masks with a firearm, the Shotgun being particularly effective at close-range. Their haunting laughter echoes as these demons approach, and will also be heard when they are defeated.

More powerful versions of the Sins, they wear a large skull mask, adorned with horns.[10] Their bodies are similar to the Sins, but their aura is a fiery crimson. As with Sins, they come in two varieties: Death Scissors and Death Scythes. Both share the ability to cripple Dante's offensive capabilities by concentrating demonic energy into their masks (indicated by the mask glowing for the duration of this attack).[11] Being a more powerful opponent, their attack methods are far more varied; in particular, beware of their corkscrew attack which can easily catch an unwary opponent off guard. As with the Sins, their weakness is their mask. The Death Scythes are the more powerful of the two, as a direct hit from one of their attacks on Dante Must Die difficulty will deal a critical amount of damage. Their laughter, more terrifying and imposing than that of the Sins, echoes when they approach, and echoes again when they die.

Nico's Enemy Report - Death Scissors
The part that looks like a cow’s bone is their main body. Their evil is much stronger and tougher when compared to the Sin's.

When they concentrate evil in their heads, their heads turn red and all of your attacks become ineffective. When you are caught in this situation, do your best to dodge their attacks.

Attack the masks to take out these enemies. Firearms work very well, while sword attacks are best used to deflect their scissors or scythes.[12][13] Their body cannot be harmed by any attacks, so don't bother aiming for their cloaked forms. The Sin Scissors are more powerful than the Sin Scythes, but they are slow attackers and are rather easy to dodge. Keep in mind that they will run through walls to avoid your attacks. Sin Scythes utilize spinning attacks and will attempt to throw scythes at Dante, and are also capable of utilizing more scythes the more wounded they become.

Sin Scissors can be killed instantly if Dante strikes their scissors with Force Edge or Alastor right before they perform their horizontal "snip" attack: if this is done, the Sin Scissors will briefly enter a stunned state where it becomes highly vulnerable. Firing the shotgun at the Sin Scissors' mask at point-blank range will kill it in one hit in this state, even in Dante Must Die mode: one Secret Mission requires the player to perform this.

Death Scissors use curved cutting shears and will imprison Dante in a dark energy field to restrict movement space. Their principle mode of attack is a powerful corkscrew attack where the Death Scissors spins around and makes several fast passes through the combat area, doing major damage if it hits. Timing rolls to avoid the Death Scissors is critical.

Death Scythes use one of four scythes scattered around the arena (a telltale sign of their presence in the current room) and can conjure magic seals on the ground: if touched, these become column-like whirlwinds that propel Dante into the air. These can be exploited to get above the Death Scythe, patircularly if the player has Air Hike. When at critical health, the Death Scythe will enter a berserk state and will gather and start throwing all four scythes at Dante at once if it is not killed quickly. They are extremely powerful, and like the others, will travel through walls to escape attacks as well. In the specific case of the Death Scythe, using Air Hike to hit it repeatedly with Alastor's downward air attack is actually more effective than shooting it with guns, since the Air Hike tends to mess up the targeting of its lunge attacks.

It is a good idea to move away from theim immediately when they die, as their weapon spinning to the ground is actually a final attack that can deal damage to Dante.

In Devil May Cry 5, Death Scissors are more in line with their Sin variants in 1, though they do retain the corkscrew attack of their namesake. This time, their shears can be destroyed by attacking them: acting like a layer of armor. They can sustain a fair amount of damage, and are destroyed in two parts, with the loss of one leaving the Death Scissors using the remaining blade like a scythe. If their scissors are totally destroyed, after a short vulnerable period they will conjure a new set.

Death Scissors utilize wide swinging attacks that can interrupt the player's offense and catch them off guard. They can also teleport to appear beneath the character to perform a surprise attack. When their faces are surrounded by a red aura (when their attacks are parried or their weapon is destroyed), Death Scissors can be destroyed with a single attack, no matter if it's melee or ranged, hence shooting them in that state is the best way of dealing with them.

They have several main attacks: their most distinctive is when they hover close, slowly open their scissors and then snap them closed with a short lunge. They can also twirl their scissors which they commonly do as a counter, or perform a turning cut with their scissors which is harder to counter. At long range, they will hold their scissors out in front of them and start to rotate, then charge forward in a drill attack, which they can repeat several times sequentially, often passing in and out of walls to take the player by surprise. All of their attacks are preceded by a sound cue, either demonic laughter or a whimper-like sound.

The easiest time to parry is the first. During this animation, the blades of the scissors will gleam white when they are almost fully open: a melee hit after this gleam will count as a parry and place them in their vulnerable state. The gleaming "tell," also present on their turning cut attack, is removed on Son of Sparda difficulty and higher, but this tactic still works on higher difficulties.

As Nero, Rawhide can easily stop their strikes due to its fast activation and wide reach, allowing the player to quickly destroy the enemy. Other Devil Breakers can deflect the attacks as well, but they require precise timing to utilize, otherwise the Breaker will be destroyed. Death Scissors are only able to be hit with the Buster or Buster Arm in their red vulnerable state, making the move a little redundant since in this state a single shot with Blue Rose will kill them just as easily.

As V, Shadow's Combo C, Arbiter and Bayonet can be used either to break the scissors or to deflect attacks and leave the Death Scissors in a vulnerable state. Griffon's Double Check and Barricade are good tools to destroy the enemy's weapon. V himself can parry with his cane, but the timing can be tricky. It is worth noting that V can finish them any time their red aura appears, despite that they often do not turn white in this state and sometimes the lock-on cursor will not change to the version that shows they can be finished.

As Dante, the player is encouraged to use fast attacks, such as Balrog's Light Blow and Break Spiral. King Cerberus' Ice Age blocks the Death Scissors' strikes, leaving it open. Cavaliere, with its continuous hits, can destroy the scissors easily.

As Vergil, Mirage Edge's Stinger is the easiest option to deflect the scissor attacks with its prolonged active frames, leaving the demon vulnerable. Other moves that can stun them are Beowulf's Lunar Phase and Yamato's Aerial Rave B, while Rapid Slash and Judgement Cut can break the scissors easily.

The Sin Scissors are likely a reference to one of the Greek Fates (Moirae), three sisters who spun, measured and cut threads representing the lives of every mortal. Specifically, they reference the oldest sister Atropos, who was responsible for determining the manner of death of each mortal and cutting the thread of their life with her "abhorrant shears."

The Sin Scythes are likely inspired by the classical Western rendition of the Grim Reaper, which is often portrayed as a skeletal figure in a black cloak wielding a farmer's scythe. 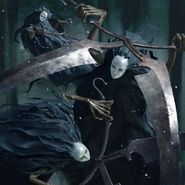 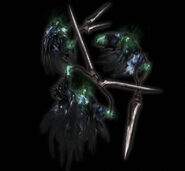