In Devil May Cry 4, Nero gains the ability to use Summoned Swords after obtaining the Yamato.[4] Instead of resembling the Force Edge as in other appearances, they appear to be two-pointed Shuriken.

Nero's Summoned Swords look like curved, two pointed shuriken with spikes protruding from the center. They glow light blue. While hovering around Nero they will spin. After being embedded in an enemy for a short amount of time, they will disappear in a blue-white smoke. In Devil May Cry 5, after awakening his true Devil Trigger, Nero's Summoned Swords now look like kukri blades.

Vergil's Summoned Swords are his equivalent for guns. However, unlike guns, they do not recoil and therefore cannot cause him to hover in mid-air. When using Spiral Swords, the Devil Trigger gauge is reduced by two full runes. Furthermore, because summoning the swords does not interrupt the current action, they can be used at any time, even during recovery animations and combos. Spiral Swords serve as a useful defensive technique, shielding Vergil from harm while performing attacks with long start-up or recovery.

As a boss, Vergil only uses Summoned Swords in "Dante Must Die" mode. Alternatively, during fights, Vergil will use the Spiral Swords if the player hasn't received any damage from him. He will create a shield around him, which pushes the player away and will create the Spiral Swords while saying "Don't get so cocky.". The player can then use Nevan's Jam Session to destroy all of Vergil's swords as he's summoning them.

Nero's Summoned Swords function in much the same way as Vergil's, however; they can only be used while Nero is in Devil Trigger. Unlike Vergil, Nero will fire his Blue Rose in addition to the Summoned Swords, and using them affects his Devil Trigger Gauge; the gauge will deplete faster when Nero uses this skill. Because using Summoned Swords does not interrupt actions, Nero can use them while performing any action, including Buster, for additional damage.

In several attacks, like the Maximum Bet and Showdown, Nero can utilize the Summoned Swords even without using the Blue Rose.

Vergil's Summoned Swords-related moves from Devil May Cry 3: Dante's Awakening return, with most of their properties from said game being unaltered. Spiral Swords is no longer needs to be active to use Blistering Swords and Sword Storm. While using Spiral Swords, you can fire Summoned Swords separately. Summoned Swords will no longer fire during recovery animations and taunts. Vergil gains a new move called Heavy Rain Swords which immobilizes enemies with a storm of swords from above. Summoned Swords have also become more integral to his gameplay as he can now warp towards any that have first been embedded by them and can also use this in place of Nero's Devil Bringer by latching onto glowing skulls. Yamato Combo B and Rapid Slash(only in Devil Trigger) can create a Summoned Sword to impale any enemies hit, which then detonate after sheathing his sword.

Nero's Summoned Swords function in much the same way as they did in Devil May Cry 4.

The Summoned Swords appear in Ultimate Marvel vs. Capcom 3, as one of Vergil's Hyper Combo moves. In their default state they resemble the Spiral Swords but they can be reconfigured (by sacrificing another bar of meter) to operate as the Sword Storm or the Blistering Swords. In addition to these is his LV3 Hyper Dark Angel which has him summon swords behind the enemy in rapid fashion as he repeatedly slices them with Yamato, only raining down on them after sheathing his sword.

The Summoned Swords appear in DmC: Devil May Cry as the Sword Illusions.

Summoned Sword of Vergil in Devil May Cry 5 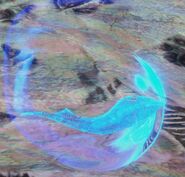 Retrieved from "https://devilmaycry.fandom.com/wiki/Summoned_Swords?oldid=89414"
Community content is available under CC-BY-SA unless otherwise noted.