Tartarussian waited within Dumary Island's clock tower, where he guarded the Arcana Spada. Once Lucia ascends to the top of the tower, Tartarussian emerges from a secret chamber to slay her, but is defeated himself. Lucia then takes the Arcana. Upon her return to the village, she gives it to Matier, who sends her to the underground ruin to retrieve the final relic. Once she finally arrives at the underground ruin, Lucia descends into it until she reaches the deepest chamber, where she finds Plutonian guarding the Arcana Calice. She manages to knock him out and take the Arcana, at which point Dante arrives. She entrusts him with the relic, before leaving to attack Arius. Though Plutonian revives and attacks Dante, Dante puts it down for good.

Main articles: Lucia's Mission 2, Lucia's Mission 8, and Dante's Mission 12
Both of these bosses will either whip their flails at Dante if he is at medium range, or swing them in a circle if he gets too close. Plutonian will also try to smash the player between his flails. Plutonian can also summon Agonofinis demons to assist him, or cause electric beams to shoot out of the walls.

Plutonian was added to TEPPEN via its "The Force Seekers" expansion. It's featured in one green unit card. 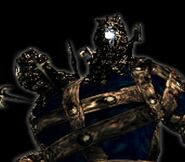 Close-up.
Add a photo to this gallery

Retrieved from "https://devilmaycry.fandom.com/wiki/Tartarussian_%26_Plutonian?oldid=99907"
Community content is available under CC-BY-SA unless otherwise noted.