Tateobesu is a boss in Devil May Cry 2. Only Lucia has the task of fighting this tricky boss in Mission 7, and unusually, the entire battle is staged underwater. In the Devil May Cry HD Collection, the player will achieve the award "Deep One" if the player defeats Tateobesu.

Tateobesu is a fish like demon which has the ability to render itself invisible,[1] making it impossible to lock-on, though it is still trackable with the naked eye.

Tateobesu is a higher-level type of a fish demon, which can generate electric field on his tail, which paralyzes opponent and deals huge damage. With his streamlined shape, he can easily maneuver in the water and even render himself invisible. His tail whip attacks are strong enough to shatter stone columns and he's also capable of attacking with his sharp as razor teeth.

Main article: Mission 7
Whenever his tail turns white it means it’s preparing to whip you with it, so try and swim to a side to avoid it and when he eventually becomes visible again be careful of his charging attack, swim as fast as you can and if done correctly you should be able to wind up behind him when he rushes by allowing you to blast away with your bow gun some more. Keep in mind that you are able to use your Devil Trigger underwater so use that to your advantage. It's not recommended to fight him close to a wall, he might glitch out and start loop in which he bites the player constantly, without any way to run out of it. 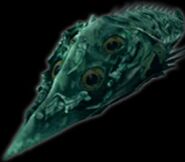 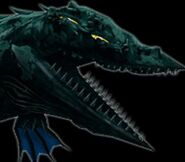 Open jaws.
Add a photo to this gallery

Retrieved from "https://devilmaycry.fandom.com/wiki/Tateobesu?oldid=94123"
Community content is available under CC-BY-SA unless otherwise noted.