Start a Wiki
watch 02:21
The Loop (Games)
Do you like this video?
This article is about demons in the manga. You may be looking for the enemies from Devil May Cry.

The Seven Sins are a group of powerful demons that appear in the Devil May Cry 3 manga. They represent the seven vices; sloth, gluttony, greed, envy, lust, wrath, and pride. Similar to The Fallen, they fell from celestial grace and were cast to earth as punishment. They are the first seal on the Temen-ni-gru, set there by Sparda by nailing them to the earth with cursed stakes and taking their names away, and thus their power.

During their attempt to raise the Temen-ni-gru, Arkham and Vergil unsealed the majority of the sin demons. Arkham introduces the first to Vergil in the subterranean catacombs of a church. It resembles a giant, baby-faced statue; its eyes turned to the ceiling, one foot pinned to the ground with a spike and the other treading on a snake, and its belly missing save for its spine. When Arkham explains how they remain trapped--how Sparda had rendered them powerless by removing their names--Vergil expresses disbelief that it is even possible to do such a thing. The first sin then shows Vergil a vision of death, but Vergil cuts through the illusion, slicing the demon's head off. The first sin then demands its name back from the son of Sparda. Vergil doesn't grant the demon's wish but instead empowers it to name itself. The first sin chooses to call itself "Gouman", meaning "Pride".

The naming of the second sin is not shown, nor is it explained which one it is.

The Mad Hatter tries to trick Dante into naming the third sin after dropping him through the floor of another church, this one surrounded by a large graveyard. The third sin resembles a multi-winged woman on her hands and knees, with her head cracked off at the neck and lying upside-down nearby, and her wrists in shackles, staked to the ground by the chain. Dante refuses to name the demon, but then Vergil appears and again gives the demon the ability to choose its own name. It picks "Sloth".

In a preview of the third, unreleased volume, another sin is briefly introduced, speaking cryptically about evil and despair, before crowning itself "Greed." Its shape is not shown to the reader, nor where it is located or how Vergil came to it. 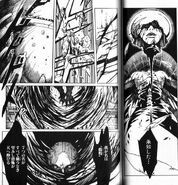 Sloth
Add a photo to this gallery

Retrieved from "https://devilmaycry.fandom.com/wiki/The_Seven_Sins?oldid=107418"
Community content is available under CC-BY-SA unless otherwise noted.