Viewtiful Joe is another series of games created by Devil May Cry creator, Shinji Mikami. The series centers around Joe, an average movie goer, who is sent into Movieland and becomes a hero, Viewtiful Joe. Joe has a rival in the series called Blade Master Alastor who is inspired by the sword and is meant to be the spirit inside it.

The first game begins with Joe on a date with his girlfriend, Silvia. The villain of the movie kidnaps Silvia and Joe enters Movieworld to save her. The hero of Movieworld, Captain Blue, appears and gives Joe a V-Watch so he can Henshin (transform). Joe faces a number of members of the evil JADOW organisation, including Alastor. After his defeat, Alastor describes his moves as "Beautiful" and Joe names himself "Viewtiful Joe." Joe eventually saves Silvia and she gets her own V-Watch and becomes "Sexy Silvia," ("Go-Go Silvia" in the English version of the anime adaptation.)

References to Devil May Cry[]

Although Viewtiful Joe does not appear in the Devil May Cry series, he is good friends with Dante in the Viewtiful Joe games. The two team up to take down a villain in Movieland. Besides this relationship, he and Dante share some similarities:

One of Joe's main rivals is a devil named Blade Master Alastor. His appearance and attacks are inspired by the Alastor, one of Dante's Devil Arms from Devil May Cry.

Karnival is a red biplane Dante uses in the Viewtiful Joe series. It is presumably the same plane he used to escape from Mallet Island in Devil May Cry. 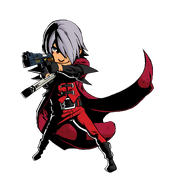