Start a Wiki
watch 01:51
The Loop (Games)
Do you like this video?
This article is about classic Vergil's signature sword. You may be looking for the weapon from the reboot.

The Yamato is Vergil's trademark dark-forged blade based on a katana appearing in Devil May Cry, Devil May Cry 3, Devil May Cry 4 and Devil May Cry 5. It is a legendary sword that was once wielded by his father, Sparda[3], and was left to Vergil as a keepsake.

Yamato is a katana with an ornate bronze guard; the exact details of how it looks change throughout the series. In the first Devil May Cry, the Tsuka (柄, Tsuka? lit. "handle") has the traditional gold wrapping, with black ornaments, and the Tsuba (鍔, Tsuba? lit. "guard") is octagonal. In later installments, the guard is an oval, and the tsuka-ito seems to be braided from white and dark blue material. The blade features several intricate ornaments, most notable is a relief of a dragon at the endpoint of the hilt. The inside and back of Nero's Devil Bringer mimic the design of the blade's hilt.

The scabbard is black, made of traditional lacquered wood, and features several metallic ornaments on its far end. In Devil May Cry 3 it also features a yellow sageo, the cord used to tie the katana to the waist.

In Devil Trigger, Vergil and Nero have different, but similar designs for the scabbard. For Vergil, it alters to appear similar to the sheath of a Kris, an Indonesian traditional dagger and is colored dark blue. It attaches to an additional appendage on his left arm, and it can adjust the position to allow Vergil to draw or sheathe his sword quicker and thus leaves Vergil's left hand free to wield the blade or other weapons. For Nero, the sheath appears to be more segmented, but it is otherwise identical.

Despite having a scabbard, Yamato is only occasionally worn on the waist; Vergil and Dante carry it with their hands during battle (though Vergil has been shown to wear it on his waist when not in use), Nero absorbs the Yamato within his Devil Bringer, and Sparda used to strap it to his back when he was alive.

"That sword was used to separate our world from the demons."
―Dante[src]

Yamato is far sharper than ordinary blades,[4] and is imbued with tremendous demonic power.[5] The sword is said to be able to cut through anything,[6] even the very fabric of space itself. The only things capable of stopping Yamato's strikes are objects powered by demonic energy comparable to the user's, such as the Rebellion or individuals powered by the Sword of Sparda. However, when the user is weakened, the sword's ability to cut through most mundane objects fades. This was seen when Lady was able to block Yamato with Kalina Ann (a mundane rocket launcher with no demonic power) at the end of Mission 13.

Vergil utilizes an ability called Judgement Cut in which he swings so fast that Yamato doesn't appear to even leave its sheath. It creates a distortion in space that engulfs his target which is sliced multiple times by the blade in very rapid succession. The ability is capable of hitting any enemies that are within the rather large distortion radius.

Dante attempts to imitate this move in Devil May Cry 4 and the result is a similar ability called Slash Dimension but it lacks the precision and potency of Judgement Cut due to Dante's inexperience with wielding Yamato, unlike Vergil. Both abilities are able to strike far away opponents. Dante and Vergil demonstrate Yamato's ability to cut far away enemies with normal swings as well. Vergil, during Dante's battle with Arkham where Vergil appears and slices Arkham's handoff from atop a pillar a good distance away, and Dante, when he uses it to destroy the Hellgate with a single swing from a great distance away in Devil May Cry 4.

Similar to Dante's Rebellion, the Yamato is able (to an extent) to bring out its wielder's true potential. This is shown in Devil May Cry 4 during Mission 7. As Nero was about to die as the hands of Agnus' Bianco Angelos, his Devil Bringer resonated with the broken Yamato and restored it, which was something not even Agnus could do. The sword awakened Nero's power, allowing him to access a Devil Trigger of his own.

Similar to the Sword of Sparda before it, Yamato was used to seal a pathway to the Demon World—in this case, the Hell Gate on Fortuna. The gate is reopened by the Order of the Sword using Yamato but was later destroyed by Dante, who was using the same blade.[7]

In Devil May Cry 5, Vergil was able to use Yamato in a manner his father did to separate the Human World from the Demon World; but instead, he used it to separate his Demon-half resulting in the birth of Urizen and Human-half resulting in the birth of V in order to defeat Dante. As Urizen, Yamato transformed into a large human-sized crystalline structure that served as his shield, flying around to block attacks from any side.

Yamato once belonged to Vergil's father, Sparda, and according to the Order of the Sword, it was used to seal the "true Hell Gate". It was eventually given to Vergil as a memento, and he used it as his primary weapon. Devil May Cry 4

Vergil uses Yamato as his primary weapon while he attempts to reactivate the Temen-ni-gru. When his attempts fails, Vergil falls into the Demon World with Yamato, where he is found by Mundus. Vergil attempts to defeat the demon king like his father, but is defeated and reborn as Nelo Angelo. Devil May Cry 3: Dante's Awakening

At some later point, Yamato was found by the Order of the Sword - albeit in a shattered state. It was kept in Agnus's Containment Room within Fortuna Castle but is restored and taken by Nero when his dormant powers as an heir to Sparda emerge. From then on, Nero is able to use the sword while in Devil Trigger. However, it is taken back from him by Sanctus when he is absorbed into the Savior and is then used by Agnus to reopen the Hell Gate. After slaying Agnus, Dante retrieves Yamato from the gate seal and uses it to destroy the gate, after which he wields it while in his Dark Slayer Style. While fighting the Savior, Dante uses the blade to free Nero and sends it back to him so that the youth can finish the fight against Sanctus. After the battle, Dante charges Nero with keeping it. Devil May Cry 4

Yamato would remain in Nero's possession for an untold period, remaining in his Devil Bringer arm as the young hunter continued his career in hunting demons. Unfortunately, Nero would lose possession of Yamato after getting ambushed by Vergil, effortlessly ripping the Devil Bringer from Nero and taking Yamato for himself. When he became Urizen, the Yamato took on the form of a reddish-orange crystal that prevented any attacks from reaching him. When the Qliphoth fully revealed itself, he calls the shield away, briefly reverting back into its original form for only a second before vanishing. After reforming, Vergil would then use the Yamato to battle both Dante and Nero before descending into Hell to cut the roots of the Qliphoth tree. Devil May Cry 5

Although Yamato is said to be able to cut through anything[6], this aspect does not carry through to gameplay for obvious reasons. Enemies with shields, such as Dullahans, are still invulnerable, and background objects are not affected.

Main article: Dark Slayer Style
Yamato is intimately linked to Vergil's signature Dark Slayer Style, which he uses in Devil May Cry 3: Special Edition and which Dante homages in Devil May Cry 4. As a warrior fallen from grace, Vergil can use the power of darkness to obtain new weapons and skills by leveling the style[8], and it interacts with his Yamato, Summoned Swords, Beowulf, and Force Edge. The style itself performs much like Dante's Trickster Style.[9] In Devil May Cry 4, Dante obtains this style after receiving Yamato, but instead of being based on teleportation, it allows Dante to imitate Vergil's skills with Yamato.

In Devil May Cry, Yamato is only used for Dante's "Legendary Dark Knight" costume. It behaves exactly the same as the Alastor, even to the point that Sparda carries it on his back when not in use and wields it as a broadsword rather than using the Iaido technique. When Sparda enters Devil Trigger, Yamato transforms into the Sparda sword.

Vergil is the only character to use Yamato in Devil May Cry 3: Special Edition. When Vergil fights with Yamato, he uses both the scabbard and the blade in the Iaido style. When the Force Edge is equipped, Vergil fights with the Force Edge in place of the Yamato's scabbard. For Vergil's "Corrupt Vergil" or "Super Corrupt Vergil" costumes, Yamato transforms into Nelo Angelo's zweihänder when in Devil Trigger. This may also be related to how Yamato was broken between Devil May Cry 3 and Devil May Cry 4.

Both Dante and Nero wield Yamato in Devil May Cry 4. Nero's use of Yamato is limited to when he is in Devil Trigger, and even then he only has a few attacks with it. While in Devil Trigger, Yamato also grants Nero the ability to use Summoned Swords. In contrast to Vergil and Dante's use of the Iaido technique, Nero wields Yamato without its scabbard.

In the Special Edition of Devil May Cry 4, Vergil wields Yamato once more, and has by far the most extensive and relentless arsenal of moves, incorporating both sword and scabbard in a refinement of the Dark Slayer style, including his infamous Judgement Cut.

It is worth noting, that after executing Yamato Combo, Upper Slash or Force Edge Combo, if Vergil is able to successfully complete the sheathing animation, he will gain a Devil Trigger Orb and a small increase to Style points as well.

Also, performing a taunt with Yamato equipped, while there are enemies around, will cause Vergil to emit a black aura after a few seconds, that will replenish his Devil Trigger gauge on its own, as long as he is unharmed and stays in the taunting stance. 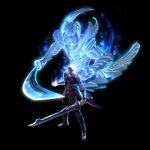 Yamato (大和, Yamato?) is a Japanese term meaning "great harmony", referring to the people and traditional nationalistic spirit of Japan, and in the past to the nation itself. Yamato was also the name of a culturally significant ship in the Japanese Imperial Navy, one of the most powerfully armed battleships ever constructed. Thus, it is appropriate as the name of the weapon symbolizing Vergil's personal aesthetic and commitment to tradition and power, as opposed to Dante's personality of resistance symbolized by the Rebellion. However, the official kanji are different; 閻魔刀 meaning "Sword of the Enma". Enma, or Yama, is the Judge of Death in Buddhist mythology, thus Vergil's signature move is named the "Judgement Cut".

Retrieved from "https://devilmaycry.fandom.com/wiki/Yamato?oldid=80278"
Community content is available under CC-BY-SA unless otherwise noted.